Region-wide Buildout Impact Analysis from the Nashua Regional Planning Commission.  Thank you Jen Czysz for helping me find this study.

There are areas in southern NH that are ripe for development.  I happen to be working on a group of properties in Litchfield and was doing an analysis on vacant land.  It got me thinking of what the development potential is in the surrounding towns.  Read the conclusion…you’ll like it too if you don’t fall asleep. 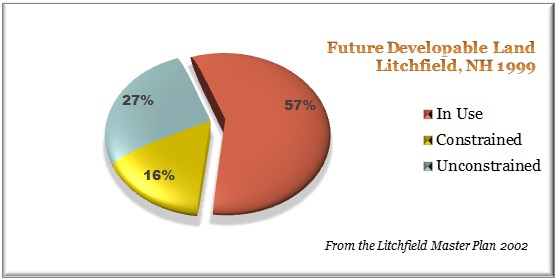 Build-out analysis is one step in the land use planning process to help municipalities plan for growth.   “Buildout is a theoretical condition and exists when all available land suitable for residential and nonresidential construction has been developed.”*  http://www.nashuarpc.org/files/5713/9463/5247/Regionwide_buildout_final.pdf

The charts below give you a better perspective of what may be available to develop.  Many towns have a proactive zoning ordinance that tracks the growth and can restrict building permits if/when the infrastructure cannot meet the needs.

The top, Nashua, has the least availability…the 2nd largest city in NH by population, no surprise.  I was completely taken back by Pelham…I double checked: 50%?  Read the NRPC PDF which explains the process of what factors they used.  Note: the data is from 2005, this would change if the town zoning requirements where modified otherwise it should keep fairly consistent being a percentage. 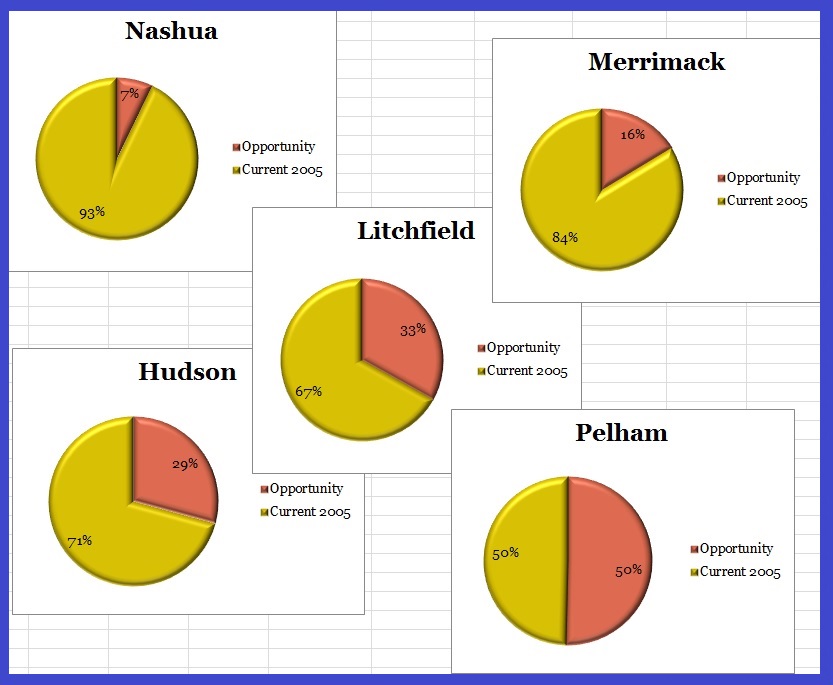 So all of these towns/city are in southern NH…easy commute to Boston.  Why do Pelham, Litchfield, and Hudson have so much potential?  Look at a map…highway access!!

SO REMEMBER…widen a highway, and you will have a lot of new development in these towns.

From Everything Real Estate with Jenn, post Land Use, Development Potential, and How Important it is in Real Estate 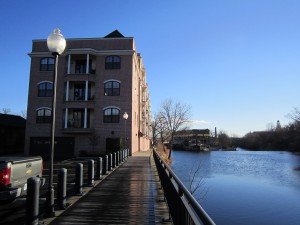 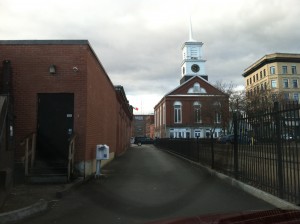 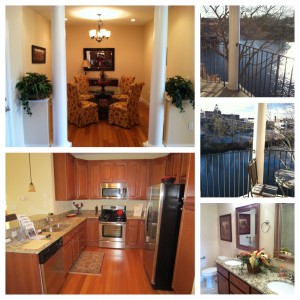 I received an email asking about the potential value difference between a new construction timberframe (post and beam, timber-frame, timber peg) home and the cost to construct it. 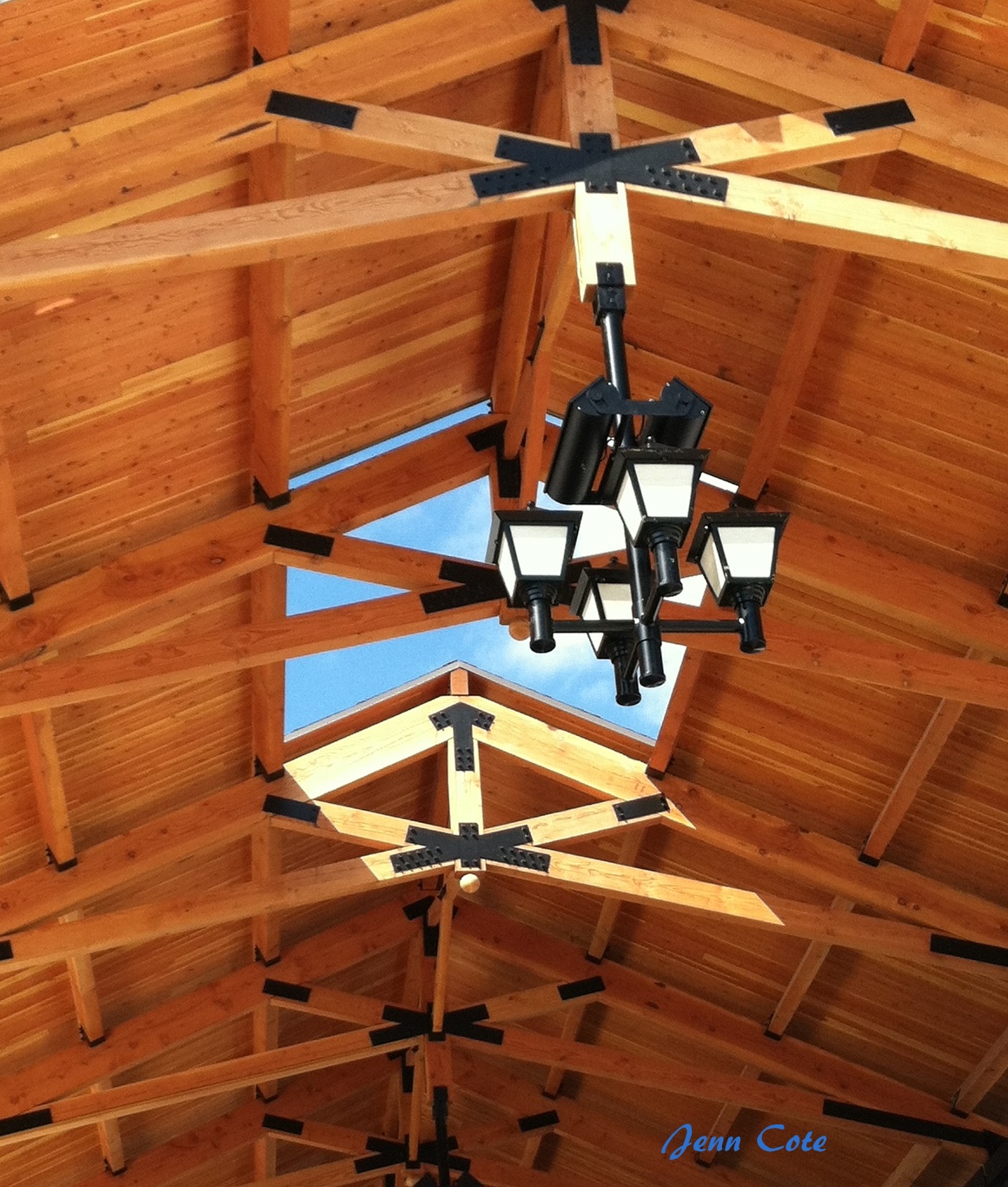 There are so many variables that go into valuing a home.  Quality of construction is one of them…timberframe homes are certainly one of my personal favorites, and would typically merit a quality adjustment.  I say typically because some towns do not lend themselves to custom built homes so therefore no quality adjustment would be given.

Try to keep the value close to the median of that town, don’t be the most expensive home.  Seeing as it’s a small home, and perhaps a more simple frame, you may be fine.

So my answer is that “it depends” but most likely a timberframe home would not appraise lower than typical construction…if anything it may be slightly higher due to the unique construction.

When building a new home there are many things you need to keep into consideration if you need to get a loan.   Don’t over build in size, in upgrades, in amenities…just don’t overbuild.  If you are building your dream home, plan on living there for a long time, and have the extra cash when the appraisal comes in low then go for it.  The timing for new construction has to be right too, with values going down over the last few years you could buy a existing, prebuilt, home for far less than new construction.  That’s changing now that the housing market has been stable in most areas in southern and eastern New Hampshire.  Housing starts are starting to increase!

From Everything Real Estate with Jenn, post Q&A Timberframe Value for Construction Loan

Subdivisions, builders, and appraisers. I’m putting out a plea…builders please befriend an appraiser! Seriously, find a knowledgeable local appraiser and set up a relationship.

Of course Realtors are an excellent resource as well, but you would need to find one that is experienced in subdivisions, one willing to figure out what options in new construction would bring the biggest return or help with shorter marketing times. 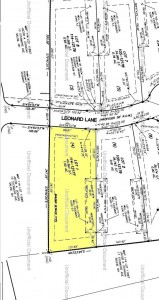 Check out another of my posts on new construction:

Every town, sub-market (entry-level, green, luxury, etc.), and style property will have different factors that affect value. Appraisers do this all the time, and they typically cover a wider geographic area than a Realtor.

The reason for my plea is I’m working on an appraisal in a new subdivision and I wonder why this subdivision is even here? This little town is still plagued by foreclosures, geographically ill-placed on the southern border of NH with only one main road in, and low-end inventory. I should first say the surrounding towns are beautiful quintessential New England communities that are far more desirable, in which market conditions have been fairly average over the past year and with good road access. The market for the past 12-18 months (in most areas of southern New Hampshire) has been for entry-level properties that are either in great condition or of investor interest.

I’m sure the land was cheap for the builder and construction started well over a year ago, but the conditions even then were not so hot. The house is over sized for this town at 2,200SF with 4-bedrooms and 2.5 baths and has been on the market for over a year. Your typical home in this town is about 1,500SF and the median price over the past year was $160,000.

A good thing is the builder has only built 3 homes in this 12 lot subdivision so changes can be made…I wonder if the Realtor will help guide the builder into constructing smaller houses until the market improves. Anyway, the house is selling for far less than it should at $207,000 because it’s over built, and currently there is little interest for real estate in this town.

So I make this plea…get acquainted with a local appraiser. I’m sure appraisers could learn quite a bit from you too!

From Everything Real Estate with Jenn, post Subdivisions, Builders, and Appraisers.